Coyote (Canis latrans), also referred to as prairie wolf or brush wolf, is a New World dog family member (Canidae) that is smaller and lighter than a  wolf.

The coyote species derived its name from the Aztec coyotl and can be found southward to Central America from Alaska, but mainly on the Great Plains. Historically, the Appalachians were the eastern frontier of its range, but the coyote has expanded its scope and can now be found throughout the United States and Canada.

The fur is long and coarse, and the buff above and below is usually grizzled, reddish on the legs, and bushy on the black-tipped tail. However, as the largest animals living in the northeastern United States and eastern Canada, there is considerable local variation in size and color. 1Go To Source britannica.com -“Coyote mammal”

Coyotes are crepuscular animals, meaning that at dawn and dusk, they are most active. They tend to be more nocturnal when they reside closer to humans. Coyotes will be more active in areas with little or no human activity and hunt during the day or any time when they can find prey available.

Coyote territories are an essential component of the behavior and habits of coyotes. An alpha female and an alpha male-led pack of coyotes will stake out their territory, consisting of a few acres or a few miles, largely dependent on the food source and coyote populations available in the vicinity.

Coyote territories will be smaller in more urbanized areas than habitats in open plains and mountain regions. Coyotes are much like dogs because urine marks their territory or home range, and sometimes even scat marks their most important territory.

They are very vocal animals that will alert the pack mates of their location using howls and yips and warn other coyotes of territorial boundaries.

While coyotes weigh only approximately 20 to 50 pounds, they hunt with deadly precision. They are carefully stalking their prey and run at 40-mile-per-hour speeds, nipping the legs of victims who are trying to escape.

They immediately aim to kill when they attack, biting the neck and compressing the windpipe. Typically, pets killed in coyote attacks die from a mixture of suffocation and shock.

While larger prey is usually eaten on-site, smaller prey are dragged or carried away like cats and small dogs, meaning that many owners never know what has become of their pets.

To communicate, coyotes utilize auditory, visual, olfactory, and tactile signals. Using 3 separate calls (squeak, distress call, and howl call), which consist of a short series of yelps, followed by a falsetto howl, they are the most vocal of all North American wild mammals.

Howling may act to announce to other packs where the territories are. Coyotes also howl when two or more pack members reunite and announce their location to each other. Their vision is less developed and is primarily used to detect motion.

Their hearing is acute, and they have a strong sense of smell. As “scent posts” on which they urinate and defecate, they use stumps, posts, bushes, or rocks to mark territory. 2Go To Source animaldiversity.org -“Canis latrans coyote” 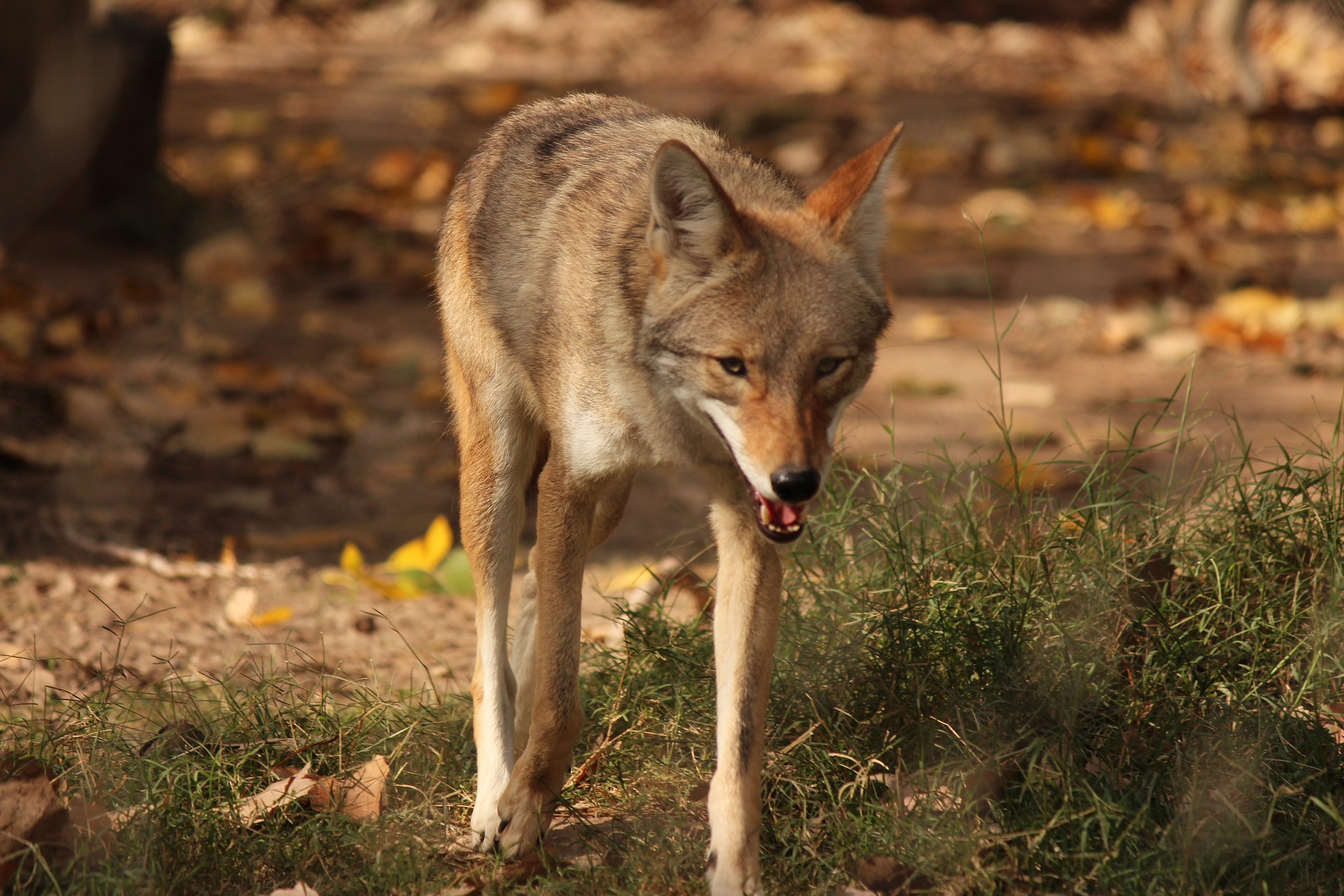 The breeding season is in March and February. Females build dens in the spring in preparation for their youth. Females have a 63-day gestation period and give birth at once to groups of three to 12 young women.

The baby groups are called litters, and each coyote baby is referred to as a pup. The litter size depends on the location where the coyotes live. There will be smaller litter in areas where a lot of coyotes are present. More pups will be born in areas with fewer coyotes.

A female coyote will remain in her den with her pups until their eyes open. That could take 11 or 12 days. The pups are old enough by fall to hunt for themselves. At 20 to 22 months old, Coyotes are generally ready to mate and live for around 10 years.

Coyotes can mate with dogs as well. The offspring are called “coydogs.” Coydogs don’t have a vast population because they typically mate and have offspring during the winter, making it difficult for the pups to survive. Also, males do not help the females take care of the pups, leading to poor survival rates. 3Go To Source livescience.com -“Coyote Facts”

In suburbs and towns like Los Angeles, New York, Phoenix, and Denver, they have also learned to live.

Various coyote species can be found in the United States (excluding Hawaii). This animal may also be found in Canada, Mexico, and Central America.

In New England and New Hampshire, the coyote is a non-native species. The first report of a coyote in New Hampshire took place in Holderness in 1944. Since then, the coyote population has spread across the United States, and coyotes are found in rural, suburban, and even urban areas. 4Go To Source nhpbs.org -“Coyote – Canis latrans”

Diet Of The Coyote

Coyotes are mainly carnivores, but they will feed on fruit, berries, and seeds if the opportunity arises. They are generalists, which implies that many different kinds of prey can and will be consumed. Rabbits, bison, rodents, deer, sheep, frogs, snakes, insects, lizards, fish, and crustaceans are commonly killed by coyotes.

This species has also been observed to hunt Harp seals, bear cubs, and rattlesnakes. Peaches, blackberries, apples, blueberries, watermelon, carrots, peanuts, wheat, corn, and beans are some of the fruits and grains they’ll also feed on. 5Go To Source animals.net -“Coyote”

Disease is the most common enemy that coyotes face. Bears, wolves, and mountain lions will also hunt coyotes. For coyotes, humans pose problems as they try to navigate through our busy roads. Every year, many coyotes are struck and killed by automobiles. 6Go To Source desertmuseum.org -“Animal Fact Sheet: Coyote”

The most common diseases occurring in coyotes are canine and distemper hepatitis. Tularemia and rabies also occur and can be passed on to humans and other animals. Parasites, including mites, ticks, fleas, worms, and flukes, are often carried by coyotes. 7Go To Source aphis.usda.gov -“Living With Wildlife Coyotes”

Coyotes can be useful members of an ecosystem and typically avoid people. However, occasionally they kill livestock, poultry, and domestic pets, mainly where coyotes live in large numbers or close to individuals.

It is not realistic to eliminate all of the coyotes in an area because voids will be filled quickly. Fortunately, even when coyotes continue to live in an area, removing individuals with “bad behavior” typically solves the problem.

Considering the range and abundance of coyotes, attacks on humans are extremely rare. A 2007 study found 187 reliable reports of human attacks, most of which occurred in California, Arizona, and Nevada. Many of these events happened where individuals deliberately fed coyotes, causing them to lose their fear of humans.

During the regulated hunting and trapping seasons, coyotes are harvested. Every year in Illinois, an average of 7,000 coyotes are harvested. Hunters take approximately 75 percent, and trappers take 25 percent. Biologists monitor coyote populations to ensure that hunting and trapping do not affect the population negatively. 8Go To Source illinois.gov -“coyote”